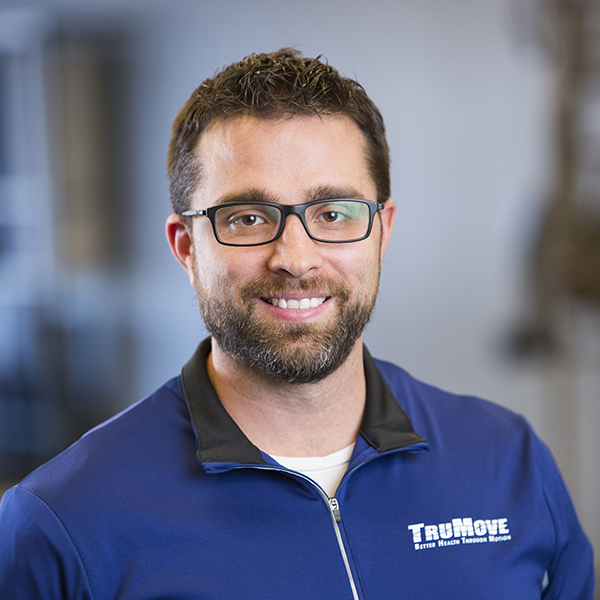 His experience as an athlete fuels his practice as a physical therapist. Drew swam competitively from age six to 26. Drew graduated high school as a first team All-American swimmer and was recruited as a member of the University of Kansas swim team. During his tenure at KU, he achieved many accolades, including first team all-Big 12, University school record holder and qualifier for the 2000 Olympic Trial. Following his competitive career, he coached for the Jayhawk Swim Team, Air Force Academy Club Team and Blue Valley North High School swim team.

As an athlete, “I’ve never been a Michael Phelps,” Drew says. “I’ve never been the most talented or the best physically in the pool. But I came to realize early, how to learn and grow is by watching the best, studying how they do it and being the best technical swimmer possible. That, with my desire to see just how far I could push myself, helped me to be successful in the pool.”

Drew attended Creighton University and graduated with his Doctorate in Physical Therapy in 2005. He has practiced as a licensed Physical Therapist in Kansas City since 2005, fulfilling his lifelong dream in 2007 when he opened Sport + Spine (now TruMove). Today, he combines his athletic experience with his physical therapy knowledge. “I’ve always been able to see movement well,” Drew says, “and I’ve always been focused on motion and function.”

Since then, he has devoted his time to both the development of TruMove and his professional education. Immediately following school, he received certification as a spine specialist though the McKenzie Institute. He also became a movement specialist though the Gray Institute, and was one of Kansas City’s first Nike Golf Performance Specialists. In 2014, Drew and fellow therapist Kim Erisman became the first physical therapists in Kansas City to receive their Dry Needling Certification. Together, Kim and Drew were the driving force to bring Dry Needling to all therapists and to the people of Kansas.

Drew married Emily in 2005, and they have two daughters, Ella Grace and Ivy Lee. Outside TruMove, Drew enjoys spending time on their new family farm in Louisburg, KS and also enjoys swimming, mountain biking and golfing. 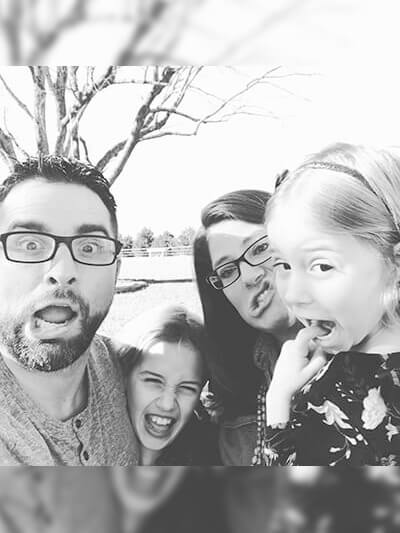 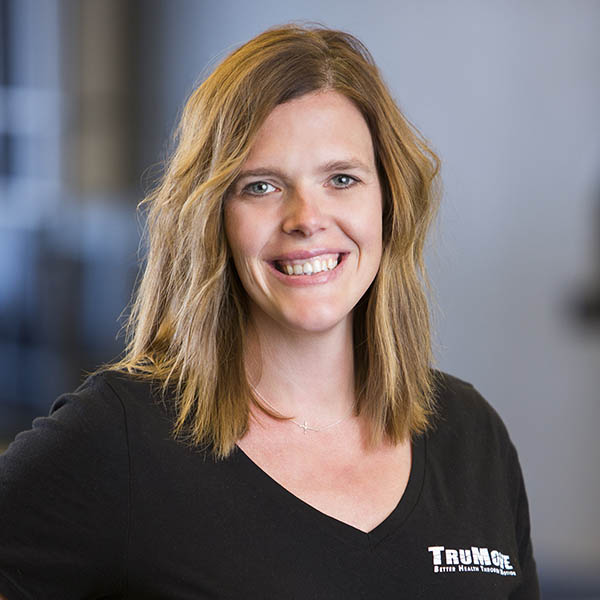 When Kim was studying to become a physical therapist, she always wanted to be in an environment like TruMove. She was initially drawn to TruMove due to her background, but she stays for the people she serves, Kim says. “It’s a rewarding job, seeing people return to the life they love and athletes making good progress in their sport. It’s fun!”

As PT Manager, Kim spends most of her days in patient care and physical therapist management. She also enjoys staying current and educated, supporting TruMove’s modern, functional approach to therapy. “At TruMove, we figure out the why, and then get patients up and moving.”

Kim is a busy mom of two active boys. She loves spending time outside with them, especially splashing around in the pool or lake. She hopes to one day find some more “me” time to train for another triathlon. For now, she enjoys the workout of jogging with a good friend or a hot yoga class.  She loves working with all TruMove patients, but as a result of becoming a mom, Kim says, she enjoys working with patients who are also parents. “It’s fun to work with people who have a little more experience than me in the parenting department!” 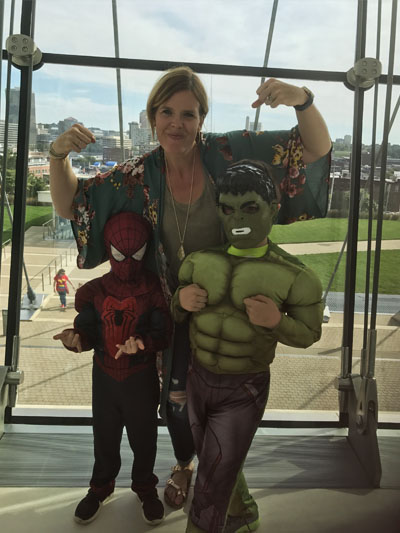 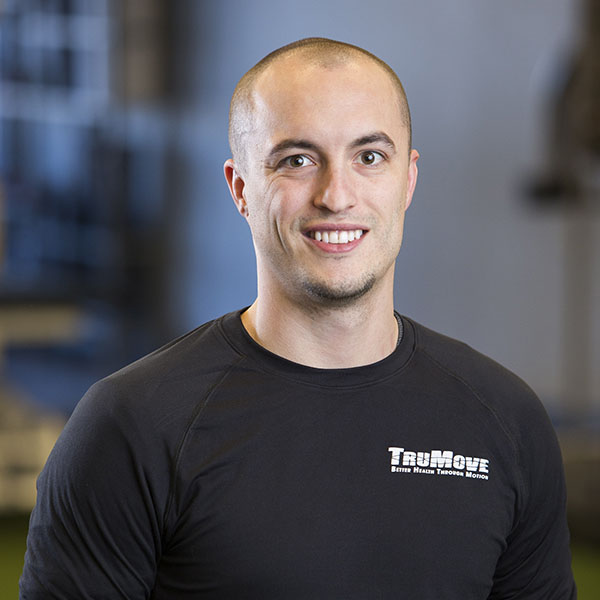 Doctor of Physical Therapy, University of the Incarnate Word (TX)

With a passion to serve patients of all ages, from all walks of life, Ethan has a deep appreciation for TruMove’s functional, whole-body approach.  “Whether patients are simply trying to get through daily tasks around the house or wanting to compete at the top of their game in highly-competitive sporting events, everyone deserves the opportunity to do so without the limitations of pain.  It is my mission to do everything I can to treat and equip them to make those goals become reality.”

A Kansas native, Ethan grew up in the small town of Eureka participating in a variety of sports.  His love for sports transitioned into a desire to help athletes achieve and maintain high performance levels.  He did so as an Athletic Trainer.  Soon realizing the impact he could have on the lives of not only athletes, but anyone who was searching for relief from pain and wanting to get back to living/performing without those limitations, he dove in to physical therapy and has never looked back.  Ethan immerses himself in research on new and innovative treatments, always searching for ways to push forward, continue to improve, and provide the best care available for his patients. 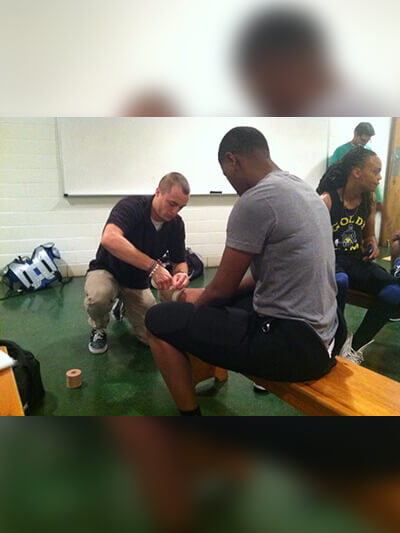 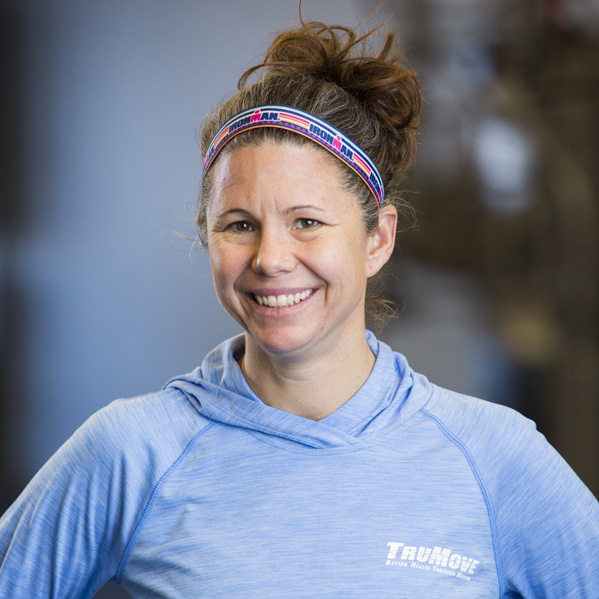 “Massage and coaching work so well together,” Liz says — and that’s why she loves her role as Massage Therapist at TruMove. Liz is a licensed massage therapist and Kinesio Tape practitioner and has been practicing sports massage for nearly a decade. She graduated from The American Institute of Massage Therapy in Kailua, Hawaii in 2003 with an emphasis in sports massage. At TruMove, Liz serves elite and beginner youth and adult athletes, as well as other patients en route to recovery. She believes sports massage is essential to athletic training, as it supports performance, injury prevention, rehabilitation and recovery.

Outside her TruMove massage, Liz owns and operates The Reds, an all-female Half and Full Ironman Triathlon Training group for beginner to advanced ladies ready to take the plunge! Most importantly, she has a five-pound small but fierce lady dog named Harley, dreams of someday being a master gardener, a dancer (who says you have to have rhythm to dance!), and living on an island! She loves travel and a good sense of humor. 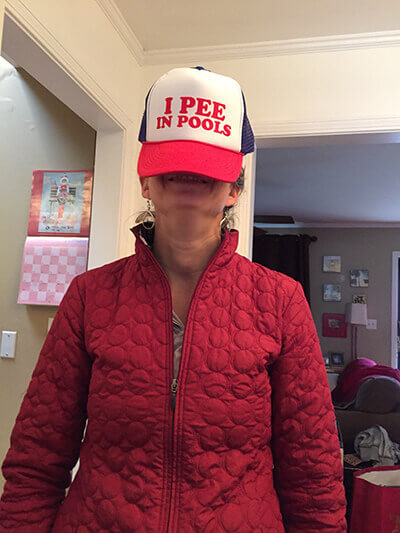 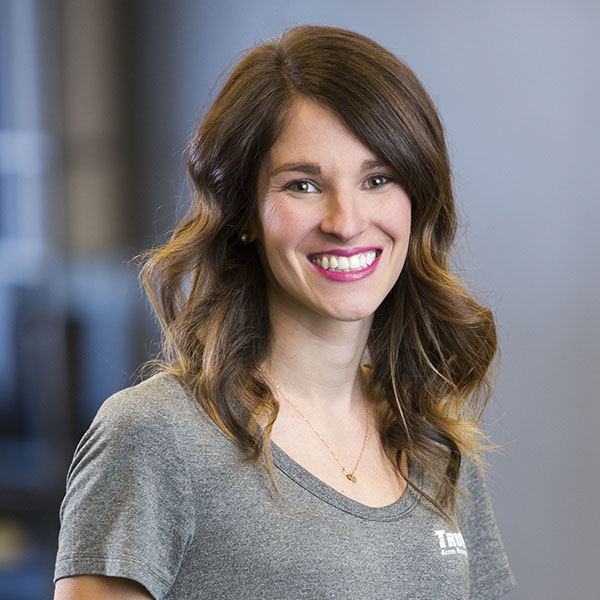 Megan serves TruMove in all things administrative as the Administrative Director, overseeing the clinic’s office staff and finances. “I also work alongside our PT Director, Kim Erisman, to keep Drew in line. He’d be lost without us,” she laughs. She studied public finance at Indiana University, and then honed her finance ability at a trust company in Kansas City upon graduation. Megan lives in Overland Park with her husband, three children, and two dogs. Originally from Indiana, Megan is a Hoosier at heart; she loves visiting family and attending IU games. When she isn’t busy wiping muddy paws or chasing around her busy toddlers, she also enjoys running the KC trails with a running buddy and photography. Megan’s favorite part of her role at TruMove? “I love the people I work with — my coworkers have become some of my greatest friends and an extension of family.” 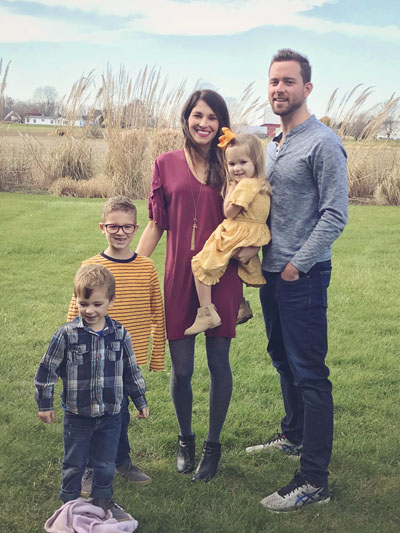 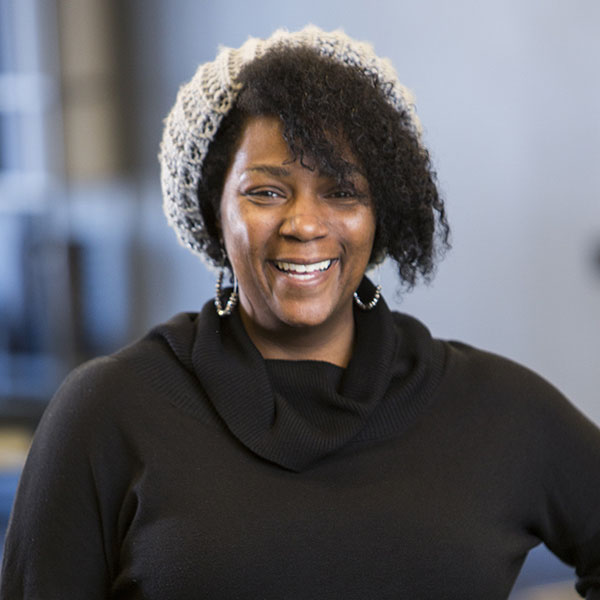 What sets TruMove apart? To Jamie Woodruff, it’s all about the environment: “TruMove is so family-oriented, and the people are just really great here,” Jamie says. “Everyone gets along very well, and we’re happy all the time!” Jamie brings a wide variety of medical finance experience to TruMove, including work in insurance, benefits and claims at St. Luke’s outpatient rehabilitation department. Today, she serves TruMove clients in billing, insurance, finance and benefits.

Outside TruMove, Jamie enjoys writing, walking and listening to live music, especially jazz and blues. She’s very close to her big family, and loves spending time with her son — “he’s my pride and joy!” These days, Jamie is cheering him on at his many sporting events, including basketball, football and maybe even lacrosse. 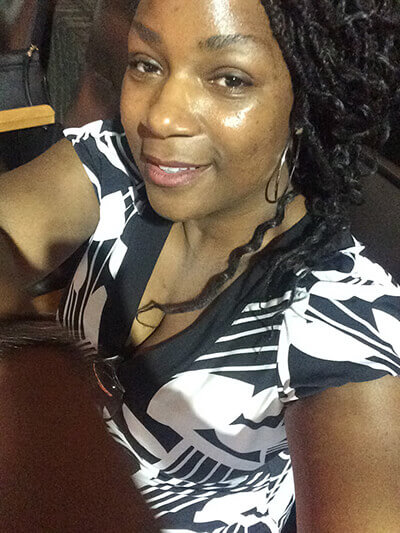 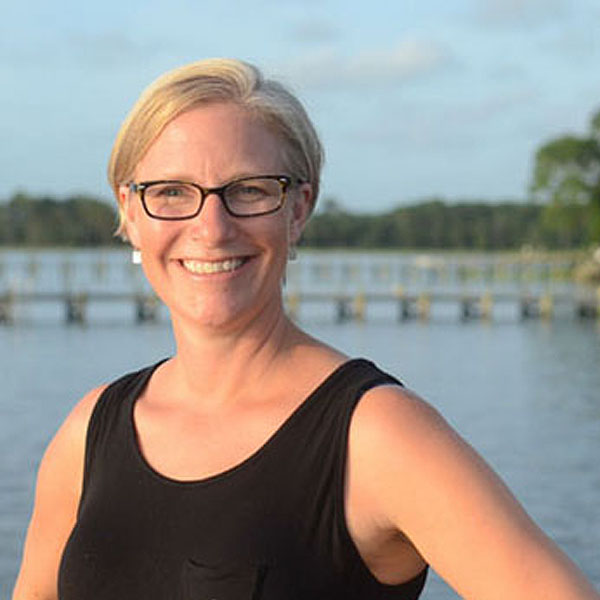 Physical Therapy from the University of New England

Following her curiosities has led her to pursue local and national teaching opportunities. She has spent the last 20 years studying the art and science of the human body. Specifically, how we are affected by internal and external forces like gravity, mass and momentum, pain, joy, trauma, injury, receptive motions… you name it, we can be affected by it.

Robin has practiced in a number of settings, happily working with people of all ages during her career at a large children’s hospital, sports medicine clinics and geriatric facilities.

In recent years her studies and practice have led her to leave the clinical setting in favor of a more relaxed setting. She recently left her beloved Studio Be in Maine to open Be Fit Co. in Williamstown, MA. If you like a good “stars aligning” story ask her what led her to take the leap.

She received her “basic training” in physical therapy from the University of New England, graduating in 1995.

She continues to receive her “advanced training” with the Gray Institute and with her clients, family and friends studying of the art and science of the human body. Robin earned the distinction of Fellow of Applied Functional Science in 2010 by completing the 40-week GIFT program at the Gray Institute in Adrian, MI.

Robin is currently serving in her 4th year on the faculty at the Gray Institute as a mentor/facilitator for the prestigious GIFT program. GIFT is currently in it’s 10th year educating movement professionals from 20+ countries worldwide. 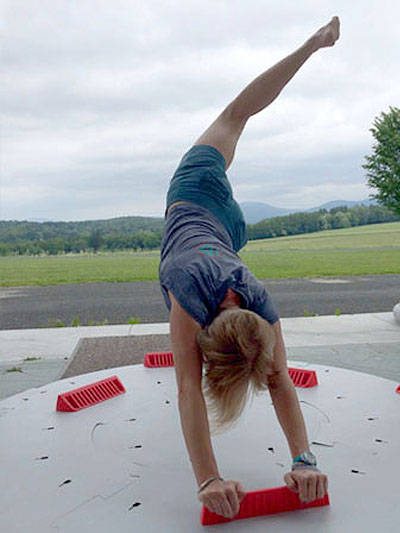 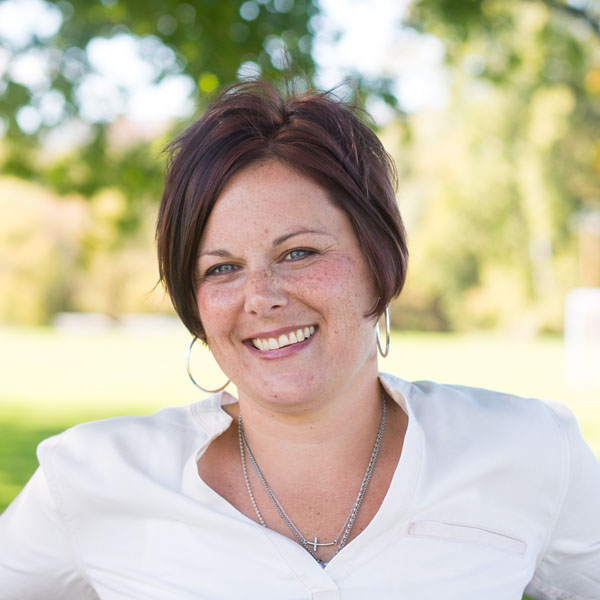 In the grocery store and on the street, strangers are compelled to talk to me. My coworkers joke that I must wear a sign that says “talk to me and tell me your story”. I’m not sure how I give off that vibe, but I wouldn’t trade it for anything. It’s what has allowed me to connect so well with my physical therapy patients over the course of my career. I truly enjoy making lasting personal connections, earning their trust, and establishing a comfort level for the women I treat. This bond becomes an opportunity for vulnerability, which is never easy, but it is when the sharing of honest information occurs. I have discovered that this crucial personal information is often not revealed in other aspects of medical care. The interaction with my patients is a relationship that I take seriously and enjoy tremendously. My so called “people person superpower” is what drove me to create My Core Floor. It’s an opportunity to connect with women outside of my physical therapy clinic. It’s a resource to spread accurate, understandable content and not let myths and misinformation dictate how we live. It’s a chance to create a program that will make women stronger. I look forward to helping you and hearing your story.

Personally, I would like to thank my family for their loving support, my coworkers for their constant encouragement, Bob Wiersma for sharing his creative insights, and Gary Gray of the Gray Institute for influencing my treatment style. You have all helped solidify my passion for improving the lives of women and I am forever grateful. 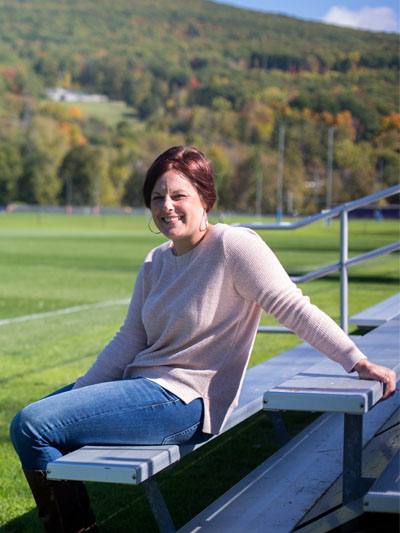 TruMove is conveniently located off I-435, in Overland Park near 105th and Metcalf.

For Back, Joint and Muscle Pain

for Appointment or Information